I'm cleaning out my closet... (If you read The Horoscope Wars you'd know that's what ever good Cancer does!!!)

I find these lovely Armani harem pants that I had completely forgotten about. It got me wonder about women in pants and how exactly it came about. (Note to readership: Hillary had nothing to do with this.) 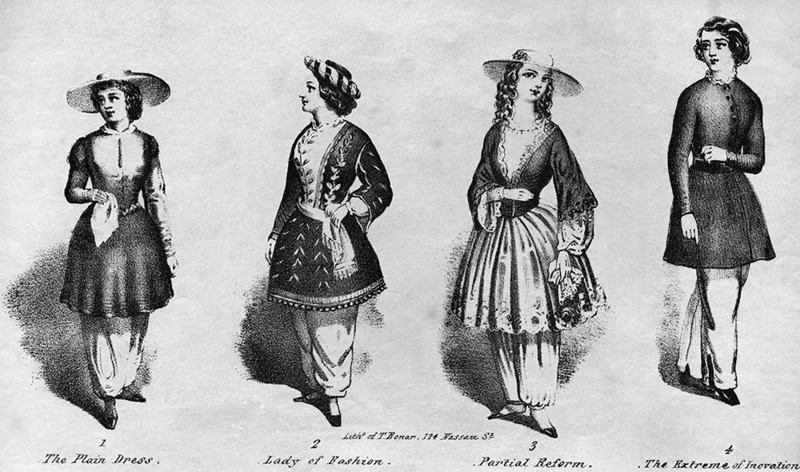 It turns out that in the  summer of 1851, a pair of pants made headlines across America. The “bloomer costume,” also called “Turkish trowsers,” set off a fire storm of commentary from women’s rights activists, fashion enthusiasts, and critics across the country. In a social reform journal, Mary Williams described  described the outfit as “TuFerkish pantaloons and a short skirt, leaving the upper vestments to be fashioned according to the taste of the wearer.” Williams wrote that the bloomer costume was “infinitely superior” and “ought to receive the friendly countenance of all sensible persons of either sex,” emphasizing that the choice to wear the outfit was based on health and fashion, rather than a desire to wear men’s clothes. Women's rights activist quickly adapted the look but the outfit became most closely associated with Amelia Jenks Bloomer, the editor of The Lily, a temperance journal. The “bloomer costume” caught on among some white middle-class women who saw “dress reform” as an integral part of the fight for women’s equality in the mid-1800s. Some 50 years before bloomer-clad women rode bicycles in public, heralding a new era of freedom for women, few dared to don the trousers in public. The women who did wear the style became known as Bloomers, partly for their dress and partly for their interest in women’s rights issues. The bloomer trend may have been short-lived in 1851 but the media storm that followed made it clear that, especially for women, fashion is political, whether we like it or not. Many people (most of them men) were convinced that bloomers were a political statement instead of a health initiative—writers stoked fears of a women’s takeover of male space, led by Bloomers in “Turkish trowsers.” Thus, in the language of clothes, pants equal power, underscoring the social fears and possibilities that emerge when women make their own clothing choices. In the end the activist abandoned the bloomers as they felt is was distracting for their property ownership and voting initiatives. Moral of the story: The 60's burning of the bra had been done a 100 years earlier with a much bigger prize in the end! I hope you have enjoyed my brief beading break. Let's chat soon, Carol